From our 2017 pilgrimage to Southern India:

an article by pilgrimage participant Jason Stern in the February 2017 issue of Chronogram online.

"There's a multitude of impressions from a recent trip to India that I would like to share, as they were, for me, such good medicine in a troubling time. Please forgive the naive perceptions of a wide-eyed tourist but know they are sincere. Here are three, in a triadic sequence.

I spent the first and last nights of a trip through south India...  continue 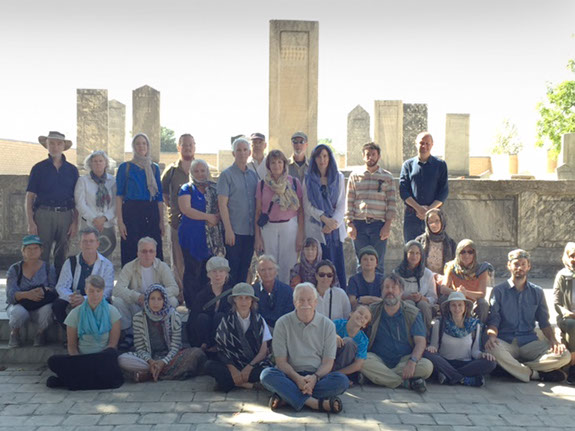 From our 2015 pilgrimage to Uzbekistan:

"This was a most extraordinary trip.

Thirty three people travelled together to Uzbekistan on the Pilgrimage, Walking In Gurdjieff’s Footsteps.

We went to the ancient Central Asian city of Khiva, spent days in Bukhara visiting the tombs of Abduholiq Gijduvaniy who is the Grandfather of the Naqushi order, Muhammad Orif ar Revgari, Mahmud Anjir Fagnavi, Ali Ramitani, Muhammad Sammasi, and Hazreti Bahouddin Naqshbandi.

We did movements on a roof overlooking Bukhara, did the Greater I-Am exercise at Bahouddin Naqshband’s tomb and met with and spoke about the Latifas with a Naqshbandi Sheik.

On to Samarkand and the tomb of Kwaja Ahrar and much else. We spent much time at the tombs, working together and individually as these places are extraordinary fulcrums of energy. There aren’t words! We spontaneously did the First Obligatory at Ulugh Beg’s observatory overlooking Samarkand.

Most of us went on to Jerusalem and worked at the sacred sites of the Wailing Wall and Temple Mount; room of the Last Supper, the Garden of Gethsemane but the standout was the evening we spent together in the Temple of the Holy Sepulcher after it was locked for the evening. That night no one will ever forget; we worked together, did morning exercise together, The Greater I-Am and the Four Prophets, and many received an Understanding of Group Consciousness not experienced before."